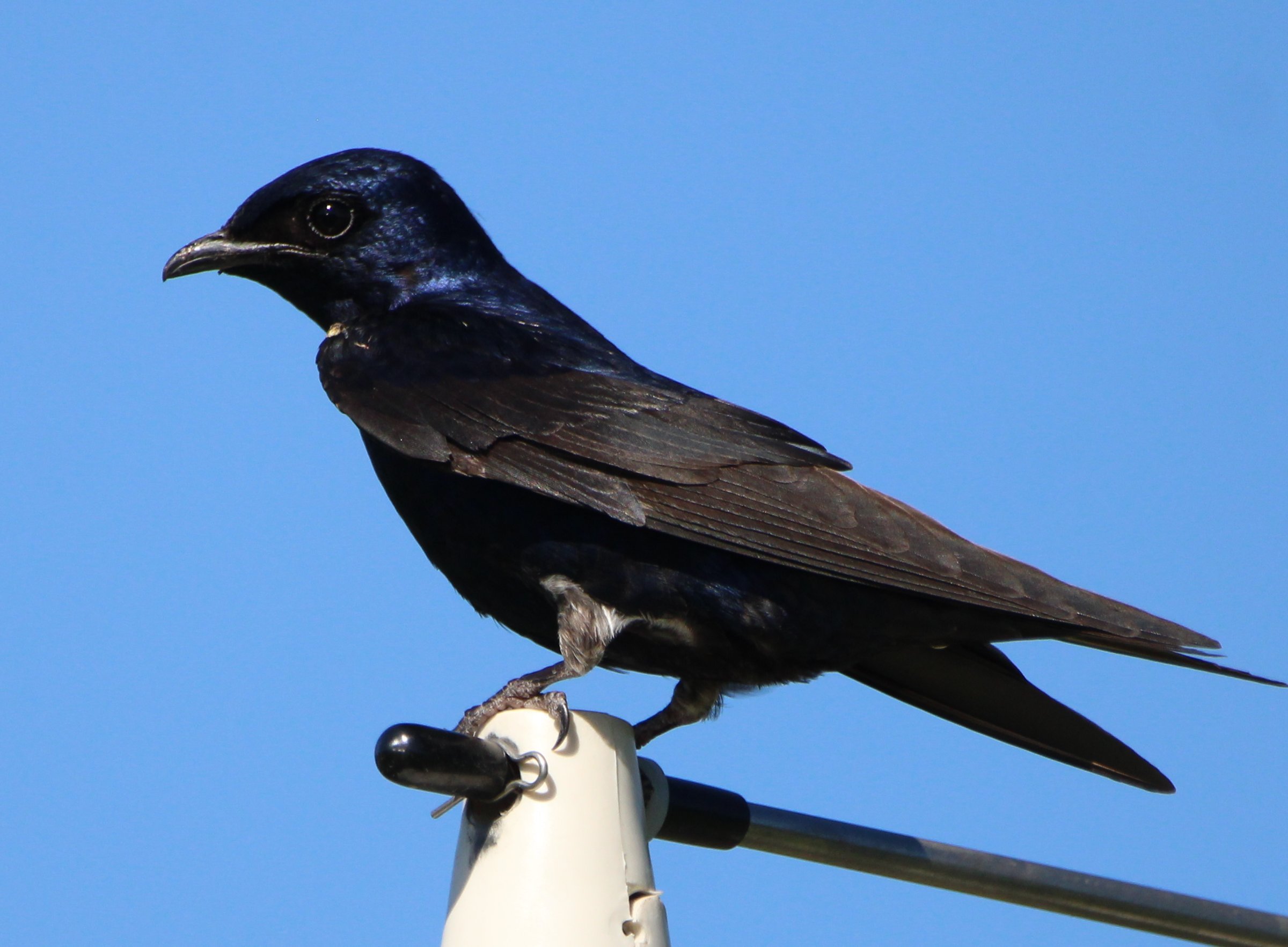 After posting the outrageously comprehensive nest site status info (for a hobby blog), PARENTHOOD, I realized that I failed to mention our colony of Purple Martins that reside just outside my office patio! They are a constant source of entertainment. I love their cheerful vocalizations – which they sing throughout the day. I have read that in the Eastern United States, they live exclusively in housing provided by humans.

Two years ago, on a whim, we bought a forty dollar Purple Martin house at the farm store. Within a couple of days of putting it up, birds arrived. Last year, we added gourds, and found that the birds used both the “red barn” style house and the gourds (albeit we have not seen a House Sparrow try to nest in a gourd, but we have seen them take ownership of one of the apartments in the red house.) This Spring we added some additional gourds and there are birds using those, as well. It’s hard to count them because they are never all in the same place at the same time. I also haven’t put in the effort to sit and calculate who is going into what home because, well to be very honest, I would find that more tedious than I want my hobby with birds to feel. Ballpark figure: there are fourteen holes in the red house, and I’d say eight to ten are occupied. There are six gourds on the first tower, and I’d say around half are occupied. There are eight additional gourds on the second gourd pole, and I’d say around half are occupied. So, we probably have between ten and sixteen pairs leasing our housing options.

Some of this year’s chicks have fledged. I can tell because I have been privy to their ‘new flight’ practice. At times, it’s like watching the ballet. But, when the wind gust increase to double digits (mph), the newbies can looks a bit like kids the day you take the training wheels off the bike!

We currently have new fledglings, birds feeding chicks and I’ve seen a bird taking nesting material into a gourd. I am assuming it’s a second brood, but it could just be a very late arrival. These birds are incredibly entertaining. They are not territorial (except against invaders like the House Sparrows.) They appear to like human activity – they will stick around when Robert is mowing the lawn just under their housing. My only complaint is that the males, in particular, are simply not easy to film against a darker backdrop (like the trees) and in low light. But, I adore their deep, iridescent purple color, non-the-less. They are a spectacular species to invite to our little piece of paradise.