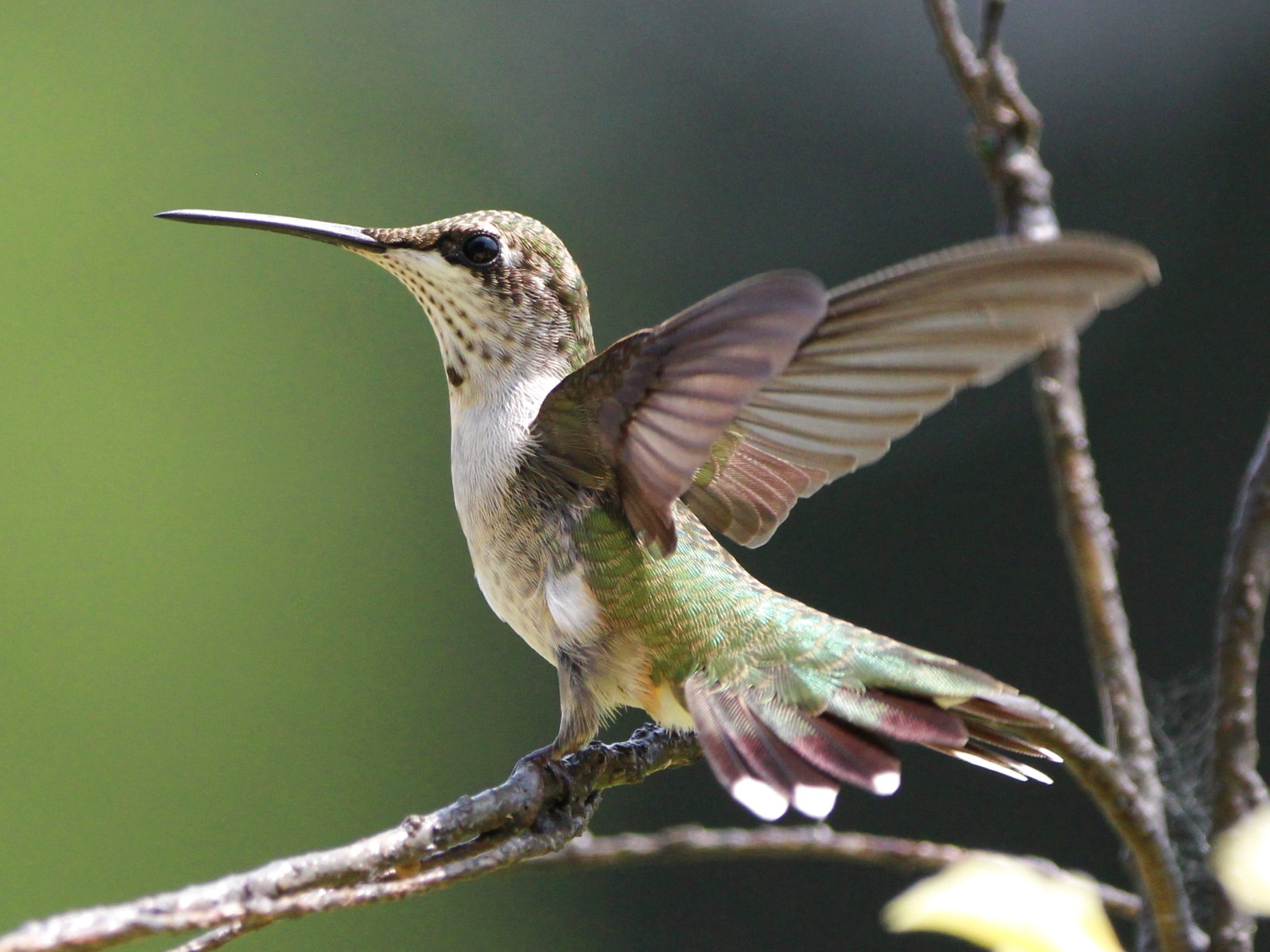 Nature is amazing. An example is the Ruby-throated hummingbird. As referenced HERE, this tiny bird weighs just 3-4 grams. In comparison, a US nickel weighs about 5 grams. Twice a year they make an incredible journey – first to winter over in Central America and parts of Mexico and then back north to breed in the Eastern (as in East of the Rockies) United States and parts of Canada. Many individuals make a non-stop flight over the Gulf of Mexico, a mission which can take over twenty hours to accomplish. Take a moment to envision that.

We look forward to the arrival of Ruby-throated hummingbirds (the only species that breeds in our area.) They seem unaffected by humans – which I have often thought is an artifact of the notion that they actually exist in a different time and space! But, they do recognize our existence and are willing to even come close enough to drink nectar from a hand-held feeder.

Based on the increased activity we are seeing at our feeders, and the fact that there are suddenly more hummingbirds visiting them, I assume that the broods have fledged and are learning the ins-and-outs of being a hummingbird before they take the outrageously long trip south in a few weeks.

Here’s a video of some of the hummingbirds that are taking advantage of our nectar feeders. This is just off the deck of my office patio. If you read my post about the nectar carousel that I crafted, that hangs just left of where I was sitting when I recorded these birds. If you turn up the sound, you will hear them chirping. Some of those vocalizations are coming from birds that are feeding from the carousel.

It’s not easy to get a clear image of a hummingbird in flight. So, I’m always happy when they land for a few seconds. One such bird is what I believe to be a juvenile male (as in this year’s hatchling). He has just a couple of bright, red feathers on his neck. I assume that’s the beginning of a full ruby throat, which only the males present.

This next photo is way-out-of-focus. But, it shows a few red, neck feathers on what appears to be a different part of the bird’s throat versus the bird shown above. So, I assume we have at least two young males that made it out of the nest and are preparing for migration.

This is a female. Judging on the amount of nectar on her head and beak, she’s probably the mother of the recent fledglings. She stopped and perched on the perimeter fence around my yard.

Here’s another female showing all the pollen these tiny birds collect. Nature’s plan is that they then transfer that pollen to other flowers in order to support cross pollination. One major measure of success in Nature is the variation within a species. It sets up the opportunity for survival during shifts in the natural world.

I’m guessing that these birds have recently fledged based on the pristine quality and cleanliness of their feathers.

Here are photos of the two adult males that I’ve seen around my office patio.

This youngster tracked an insect as it flew past. Hummingbirds do eat insects, and mama birds include them in the diet they feed their chicks.

On this day, I was able to capture some of the best hummingbird photos I, personally, have been able to record. Super grateful for that!