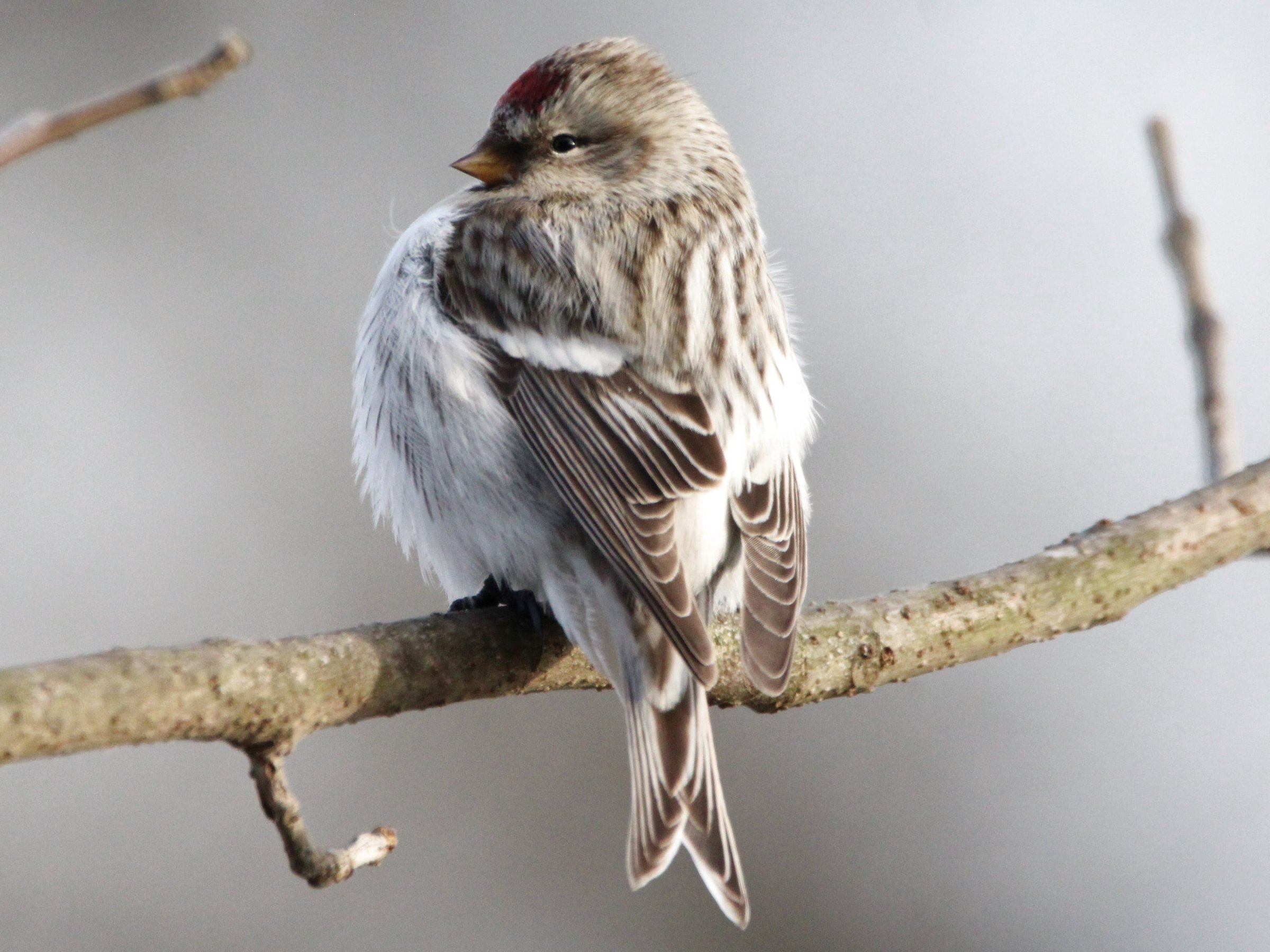 ORIGINALLY POSTED regarding a bird that stopped by our home on January 6, 2022, I RECEIVED THE FOLLOWING NOTE on June 5, 2022:

The record of one Hoary Redpoll on 6 January 2022 in Brownstown, Fayette County,  for which you provided documentation,  was recently accepted as valid by the Illinois Ornithological Records Committee (IORC).

Your documentation will be housed in the IORC archives, located in the Bird Division at the Field Museum of Natural History.  It will be available there to students of Illinois bird life interested in the occurrence of birds in Illinois. The file number for this record is 2022-002.

I’m not going to alter the original post (below) – but I now can state that the lovely bird I saw was a Hoary Redpoll, not a Common Redpoll. When I checked ebird.org my sighting is the furthest south reported sighting in Illinois. There’s a sighting in St. Louis, which is about 75 miles southwest of our location. But, none farther south than that across Missouri, Illinois or Kentucky!

As I was capturing all the lovely birds at the new feeder station off my office patio, I noticed one, very sweet looking bird clinging to a branch for a while. It was facing opposite my position, so I couldn’t see its face. Still, I felt that I had not seen such a bird before. It turned its head just a couple of times, at which time I captured the pictures. Then, I waited to evaluate it once I uploaded the files onto my computer.

I was surprised to learn that it’s a new bird for me. My novice birder ranking actually made me struggle to figure out what sort of bird it was (the beak seemed a bit too small for a finch and it wasn’t in the sparrow listings). But, eventually I came upon a Common Redpoll -only because I remembered people posting about the bird in northern Illinois and looked for the word “red” which is the one characteristic I remembered. This species makes a living in the upper arctic during the breeding season, then migrates south during winter. The normal southern edge of its winter territory is 200 miles north of our location. The “Winter Scarce” range ends just about where we live. Even if it is experiencing an irruption year (which is when a species travels farther out of its normal range in search of food because resources are low where it normally winters), we’d still be at the extreme lower end of where it travels.

When I looked up the Common Redpoll species, I noticed the “similar species” list. There’s another species, the Hoary Redpoll, that our visitor actually looks more like than the images that I saw of the Common. The Hoary has less streaking on the sides, is lighter over all, and mostly it has a smaller beak. Our visitor’s bill seems more like the Hoary.

HERE’S a link to the comparison at AllAboutBirds.

But, let’s be clear; I’m no expert, and the Hoary’s southern edge is even farther north than the Common Redpoll’s turf. For that reason, I was going to assume our bird was the Common Redpoll, unless someone in the know can set me straight. When I posted to a Facebook Birders Group, I learned about a study done back in 2015 which questioned whether all Redpoll species were actually the same with a large diversity in appearance between birds. But, another FB group member was adamant that the bird that visited us is a Hoary and asked me to submit the photos to an Illinois birding organization. So, I did. I don’t have those results back, yet.

Either way, I think this is one of the cutest, sweetest looking little birds I’ve ever seen. My heart melted when I looked at the photos I took. He looks a bit weary – but perhaps happy to be in a safe space. I only saw one. It was perched near an outdoor feeder, which includes a niger feeder for the Goldfinches (which are again plentiful visitors!) I read that they prefer to eat Birch seed, but do frequent feeders that offer thistle/niger seed.)